"Here in Bishampton, we’ve taken on a community art project to commemorate 100 years since the end of World War One and remember the sacrifices made by villagers both in the trenches and at home.

Thanks to research by the village History Society, we’re able to get a snapshot of the impact of WWI on this one small village in the rural south Midlands. Researchers, looking into the names on the war memorial, have tracked down 52 men associated with Bishampton who went off to serve in the war. From information
gathered from census and electoral registers, it seems that the village, whose population would have been 341, gave over some 50% of its adult males to the fighting. Some were too old or unwell to go, some were needed to work on essential services at home (ie food production). Nine Bishampton soldiers sadly didn’t return - and those who survived had paid a heavy price, both physically and mentally.

Our project, sited at the war memorial, comprises three parts: The first is a wooden mural.
The image of shattered trees and burned woodland is familiar in photographs and paintings relating to WWI. It’s a contrast to the verdant Vale of Evesham and there seems a link between the landscapes where ‘our boys’ were posted and the one which they were dreaming about back home, and fighting to protect. The mural uses that imagery of trees to make visible those 52 men and allow us to imagine the impact upon our village then and now, if such a crowd were to leave for war. One extra tree represents those we haven’t found out about and those who served in other wars (a 53rd name on the war memorial is that of a Bishampton soldier who lost his life in WWII). A final tree, which is beginning to sprout a leaf and blossom, represents a little hope for future generations; for healing and rejuvenation. Villager Brian Moran and his team at Vectric, Alcester, translated the original drawing into plywood shapes and brought the idea to life.

Part two is the carpet of poppies. Our poppies have been made by the community not only to remember those who were lost, but also those making sacrifices back at home. A Women’s Poppy-Making Day saw the village hall filled with women (and some men!) who came together to get a job done – they assembled about 500 poppies, carrying out the sort of work which their counterparts would have been doing 100 years ago– working together, learning new tasks, earning and raising money for the war effort. Supporting each other.

Finally, to encompass all the diverse ways in which people would like to remember the war, villagers had the chance to paint personal memorial stones. The painting process offered another opportunity to take a few minutes to think about WWI and other conflicts; to think of those involved – men, women, children, animals - to think of family stories and to paint, draw or write something as a little act of personal remembrance. This is ongoing throughout November.

We hope this project gives people pause for thought; to consider the impact of the war, the importance of community and in considering the story of one small village, imagine the impact multiplied by other villages, by other town and cities, nationwide, across Europe and the world." 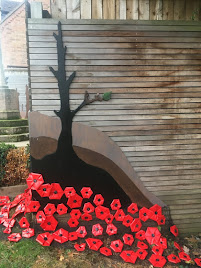 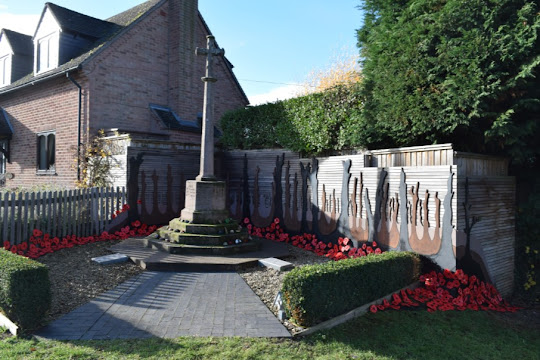 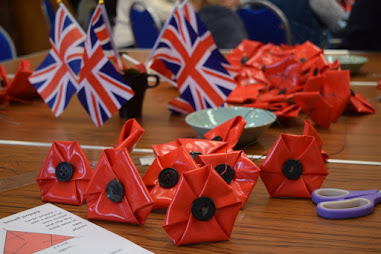 UPDATE: The frieze has been reinstated for  2019 Remembrance Day and there are plans to reinstall it each year for November, for its lifetime.